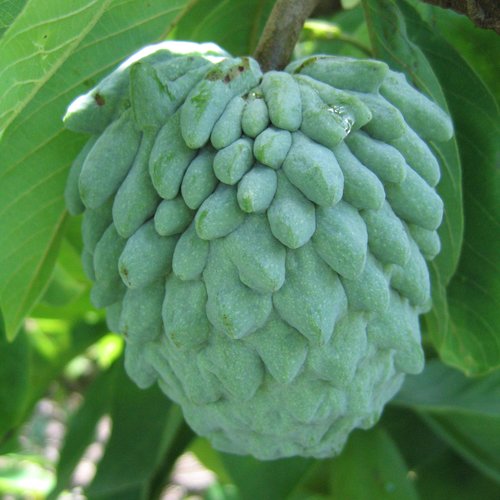 The atemoya is an exceptional “dessert quality” fruit.   I count it as one of my favorite tropical fruits.  There is a difference between many kinds of fruit that taste good, for example an apple or banana, and a dessert fruit. I don’t consider apples or bananas as being in the dessert category.  The atemoya on the other hand can be scooped out with a spoon, leaving several black seeds behind, and has the smell, flavor, sweetness and texture that make it more in the category of ice cream and a delicious ending to top off a great meal.

The fruit has fairly thin skin and black seeds. The pulp is white, creamy, yet soft, sweet, and delicious. Atemoya fruit are usually eaten fresh, but also make a great milk shake and tasty sherbet. Be sure to remove all the seeds before putting the pulp into a blender as the seeds contain several toxic alkaloids.

The trees produce as early as August and as late as January. Atemoya trees can potentially reach a height of 25-30 ft. but can be kept lower by pruning.  It is not a particularly attractive tree, so you may not want to put it in a highly visible spot.  The tree has an irregular, low spreading habit, and is largely deciduous, losing most of its leaves in the winter. Pruning is recommended on young trees to develop a desirable shape and to control excessively long shoots. As trees age, a March pruning (while the tree is still without leaves) is recommended for further shaping and size control.

Though the flowers are self-fertile, hand-pollination will enhance the fruit set. A June pruning will result in additional flowering and later fruit development. Prune long terminal branches back to 5 or 6 nodes and remove the last two leaves closest to the pruning cut. Flowering should occur on new growth. We have several trees planted in 1996 growing in our arboretum.

It seems that atemoya is difficult to graft.   Few wholesale nurseries have grafted atemoya for sale and we are not very successful in grafting it ourselves at ECHO.  As of March 2017 ECHO had been able to purchase six grafted plants from a wholesale nursery, the first in a number of years.  We suspect that planting seed from a quality grafted tree might well produce a quite acceptable fruit, but it might or might not be like the fruit of the parent.  Seedling fruit trees often require more years to reach maturity.  “An extended dry period several months prior to the spring flowering period enhances fruit set” (IFAS Univ. of FL bulletin, http://edis.ifas.ufl.edu/mg332.)  The same bulletin states that it is recommended atemoya trees be grafted onto either sugar apple or seedling atemoya and be planted only in well-drained soils.  It is possible to do a triple graft onto pond apple to get more tolerance to flooding, but that is a very complicated method and requires more time in the nursery to get a sellable tree.

Varieties (Note: As of this writing, March 2017, ECHO is seldom successful in locating grafted atemoya trees.  Phone before coming if that is the sole purpose of your visit.)

‘Gefner’ is a productive, well-known variety. It is probably the best for our area and the one we recommend most to customers. Our ‘Gefner’ froze almost to the ground one year, but grew back and produced about a dozen large fruit the second summer. It has good fruit production without hand-pollination.

‘Bradley’ is less firm than ‘Gefner’, but the flavor and texture are of exceptional quality. ECHO staff preferred ‘Bradley’ over ‘Gefner’ in a 2001 taste test. ‘Bradley’ reportedly does not produce as much fruit as some varieties, but this can be increased with hand pollination.

‘Elly’ is very productive like ‘Gefner’ but produces earlier. It has a creamy pear texture, softer than ‘Gefner’s’ firmer texture.

‘Priestly’ is another very large fruited cultivar. Production does not seem to be as high as ‘Elly’ or ‘Gefner.’ The fruit is of good quality, but does have a slightly grainy texture.

‘Rosendo Perez’ bears later than most other varieties of atemoya. The fruit is elongated and of good quality. This variety has historical importance in being one of the first atemoya cultivars released by the USDA in the early 1900’s.