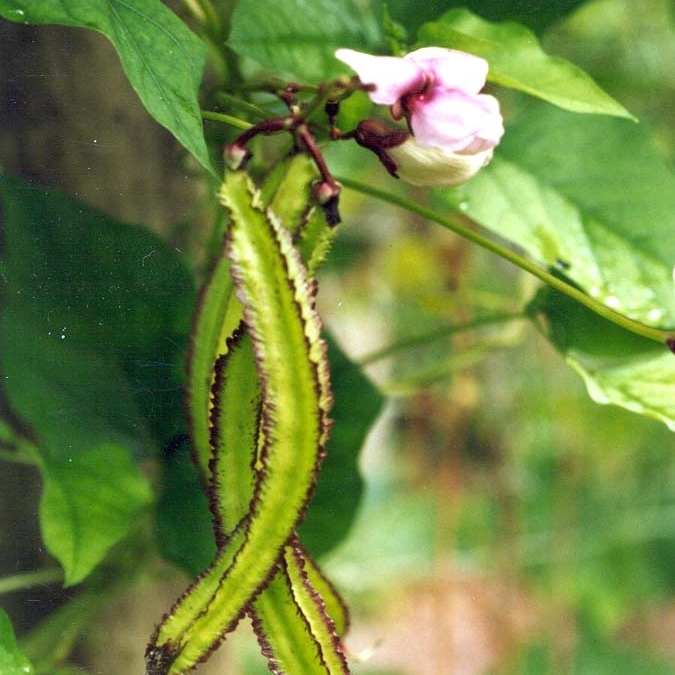 Winged Beans, Psophocarpus tetragonolobus are grown principally for their edible “winged” pods.  Pick them when you can bend the pod without breaking it or it will become too tough to eat.  The leaves and flowers are also edible and quite appealing.  The plants thrive in the hot humid summers of southern Florida with few disease or insect problems, though nematodes can be a problem.  Most varieties of this jungle plant from Borneo only bloom and set fruit when the days become very short, so they are planted in early fall. The variety ‘chimbu’ produces longer pods than most and is a striking deep red color. For pods in a summer garden in Florida or “up north,” be sure to purchase a “day neutral” or “long day” variety.  Seed available at ECHO Nursery

Adzuki Bean, Vigna angularis (a.k.a. azuki bean) and Southern Pea (a.k.a. black-eyed pea, cowpea, crowder pea) Vigna unguiculata subsp. unguiculata.  In southern Florida during the summer months Phaseolus (green beans or common beans) do not grow well due to the heat, moisture and diseases.  However, the Vigna beans usually thrive.  Here we feature two types, with a third in the following entry, all of which will do well in the summer Florida garden.  There are similarities, but differences in their uses as well.  Southern pea and adzuki have the same bushy growth habits, although the adzuki bean itself is a bit smaller than the pea.  Whereas southern pea is prepared more as a shell pea, the adzuki is prepared more as a dried bean or pulse.  At ECHO we have also noticed that adzuki bean is consistently more insect tolerant than the southern peas.

Yard–long Bean, Vigna unguiculata subsp. sesquipedalis, (a.k.a. asparagus bean) produces pods similar to climbing green beans of temperate regions except that they really can be up to a yard long.  The yard-long bean is eaten as one would eat fresh or green “string” beans, either cooked or uncooked.  There is a purple “yard long” bean that is visually quite striking in the garden.  The yard-long bean is an annual propagated by seed.  Seed available at ECHO Nursery