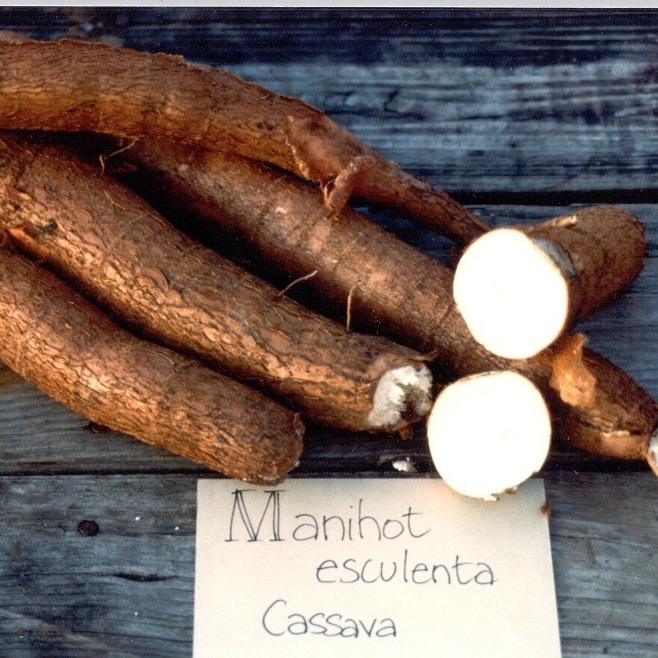 Cassava (a.k.a. Tapioca, yucca, manioc), Manihot esculenta, is an important root crop that is grown as a staple food in many parts of the tropical and subtropical world.  Tapioca is made from processed cassava tubers.  Cassava is tolerant of drought and poor soil, but needs good drainage. It is a perennial shrub harvested for its roots about 8-12 months after planting. Our cultivated varieties grow to about 8 ft. and tend to sprawl. The young, fully expanded leaves can be eaten after boiling.  They contain 11-39% protein on a dry weight basis. Cassava is propagated by stem cuttings

Both the leaves and roots contain a cyanide compound, so both should be cooked and the water drained. Cassava should only be eaten in moderation. This reduces cyanide to a very low level.  Check the web or ask a friend from the tropics for more details. Only eat cassava that is known to have more moderate amounts of cyanide. Cassava is frost sensitive but can re-sprout from the underground part of the stem if a freeze kills it to the ground.  Keep in mind that your liver can detoxify modest amounts of cyanide and has almost certainly done that for you.  Compounds that turn into cyanide when exposed to acid or chewed by an insect are one of the common ways nature has of helping plants survive.    Plant available at ECHO Nursery

Jicama, Pachyrhizus erosus, a.k.a. yam bean is a bean plant, the seeds of which must not be eaten.  It is grown for its edible underground tuber.  The tubers begin to form when days are short around December and are harvested in January or February, though they need to be planted in the summer to take advantage of the rains and long days to develop the massive vines which pour energy into forming the tubers.  Tubers will be the size of a grapefruit or larger if planted in May or June and the size of an apple if planted in August. You will find jicama in most grocery stores.  The shredded, raw, white crunchy item that you see on fancier salad bars is jicama.  It remains crunchy when cooked in a stir fry or soup, so can be used as an inexpensive substitute for water chestnut.  Jícama is an annual propagated by seed. Jicama seeds are available in the ECHO Bookstore.

Taro, Dasheen, Colocasia esculenta (a.k.a. eddo, cocoyam) and Tanier, Xanthosoma spp. (a.k.a. tannia, yautia, malanga) are two types of root crops that will grow well in the summer.  Taro and dasheen are grown principally for their large, edible starchy corms (underground root and stem structure).  Taro is grown in wet, paddy-like surroundings, is fibrous and has a spongy texture.  It is usually beaten to extract the starch which is made into poi.  Dasheen is grown in a drier, upland environment and the corms are crisp, easily cut and are eaten as a boiled or fried vegetable.  Colocasia has peltate (petiole attached to the leaf inside the leaf margins) shaped leaves to distinguish it from the Xanthosoma leaves which are sagittate (arrow head) shaped.

Xanthosoma species are also grown principally for their starchy corms, but many also have leaves that when cooked make excellent greens.  It is recommended to use the leaves that are freshly unrolling, although different species and different cultures will treat this differently.  Often the petioles are peeled and cut into sections revealing their spongy insides for use in soups.  These crops have varying quantities of oxalates and oxalic acid, and so it is recommended to boil them and discard the water to remove the acrid taste that may cause the sensation of pins and needles on your tongue.

You can find the corms of these crops in the grocery store and this will be your best source of propagation stock.  They can be cut and allowed to heal over or dry before planting them.  Make sure each piece has at least 1 bud or eye to sprout.

Sweet Potato, Ipomoea batatas, of most varieties will grow well in the summer and beyond in SW Florida.  ECHO has several varieties. They need very warm growing conditions so should be planted during spring and summer and harvested four to five months after planting. Propagation is by cuttings stuck directly in the ground or by small fleshy root pieces. These can be planted almost any time of the year, provided there is sufficient soil moisture.

Vine tips are high in protein; they may be cooked and eaten. The fleshy roots are a good energy food, and the roots with orange-colored flesh indicate high quantities of vitamin A.

Water Chestnut, Eleocharis dulcis, (a.k.a. Chinese water chestnut) is a popular ingredient of Chinese cooking that can be easily grown in an inexpensive plastic wading pool. The best planting time in south Florida is March through June. Start plants by placing corms in a large styrofoam coffee cup with soil and some standing water. After a good root mass has developed, place 6-10 plants on the bottom of the pool, stuff pine needles tightly around them and periodically add some fertilizer. Keep flooded with water. When the tops die down in November, you should find dozens of “chestnuts” on the bottom. You can also just grow in regular soil, but then the corms will be more difficult to harvest because they will likely be spread throughout the soil. Corms can be stored in moist mud or refrigerated at 50 to 55º F. They should not be allowed to dry out.

You can find chestnut corms in fresh markets where Asian vegetables are sold.

Yam, Dioscorea alata, (a.k.a. greater yam) is often confused with sweet potato, which is sometimes called ‘yam’ in the United States. Those who know the tropical yam, however, will not mistake it with sweet potato. Yam is a tuber crop that is well known throughout the humid tropics of Tropical America, the Caribbean, Africa, and Asia. In Florida you will see it sold in the supermarkets under the Spanish name, ‘ñame’ (pronounced: nyah-may).

The yam is an important carbohydrate food that is relatively easy to grow. Yams have a very specific life cycle. Unlike the sweet potato, which can be planted by vine cuttings almost year-round, the yam is planted once-a-year, when the stored tuber begins sprouting. At ECHO, this usually begins in February or March. As the tuber breaks dormancy, the energy is transferred from the tuber into stem and leaf growth. This vegetative stage, lasting 6 to 8 months, occurs during the warm and humid summer months. A new root system with multiple tubers develops with most of the tuber development occurring toward the end of the rainy season and into fall. When the vine dies back, the tubers are ready for harvest. At ECHO this usually occurs in late November.

Yams do well in sun or partial shade and prosper with ample rainfall. They require good drainage, and therefore, are often planted on mounds or ridges. They are most commonly staked but can be planted on a trellis or at the base of a sufficiently strong tree. At ECHO it has worked well to stake them with bamboo, not more than 1 inch in diameter as the vines have some difficulty twining up the large bamboo’s slick exterior. Growth is lush and very vigorous once the rains begin. Remember the vines die back in the fall. They then get a number of leaf diseases and look sickly; however, this has little effect on the tuber.

When harvesting, be careful as the tuber skin is thin and easily damaged. The tubers are often large, several lbs. a piece, often as great as 15 lbs. or more. The yam is consumed much like a potato – peeled, then boiled or baked. Peel or cut away any discolored areas. Yams reportedly make good French fries and chips. The storage life of the yam tuber is short, averaging maybe 2 to 3 months, due to the high moisture content. One recommendation is to harvest them as needed when they are in the dormant stage. If unused, the tuber will begin to sprout in the spring.

For propagating, yam sprouts first at the top, which is the most desirable planting piece next to a whole ‘seed’ tuber. Cut off a section about the size of an adult’s fist and cure it a few days in the shade before planting. Yam is a wonderful food and is generally an easy, dependable crop to grow.

Note: Planting should be done in February or March to allow for the greatest amount of sunlight and heat units for growth and tuber development.  Yam is then harvested in November to January.  You may purchase yams in the supermarket (generally found under the Spanish name, ‘ñame’) and these may be sprouted and planted in your garden.

Word of Caution:  A wild form of Dioscorea alata called “winged yam” is a noxious, class I invasive weed species in Southern Florida.  It is not the same as D. bulbifera the “air potato,” also a class I invasive, but care must be taken when planting this crop.